Good mornin' y'all! Fer sum time now I've been explorin' southern dishes. First, with my wild craving for southern fried chickin' with all them tasty fixin's. And now, I've got a hankerin' fer some grits. Coming from the True North Strong And Free, I always wondered what the hell grits were. I've heard of 'em in such phrases as kiss mah grits! but that's about all I knew about 'em. One day, I had an Amerian friend who gave me a packet of plain Quaker instant grits. I tried them and thought it was kind of like cream of wheat, but salty and buttery. It was tasty though. The problem was that I wanted more and couldn't find any here as they are only sold in the States, and most probably just in southern states. So good luck finding some here in the wonderful land of poutine eating surrender monkeys.

Thanks to the great invention of the interwebz, we're now able to connect with the rest of the world. Thus, I was able to get my hands on a real recipe thanks to the Food Network's website. This gentleman named Alton Brown, is a celebrity chef and he put up his own recipe for home made cheese grits using corn meal. Thankfully I live in a melting pot of a city and I was able to find corn meal at an independent grocery store that sells other products than the No Name brand or President's Choice. I swear sometimes it feels like we're in Soviet Quebec from the lack of diversity in the grocery stores. You don't pick the food you want, food picks you! I also got a block of soft orange cheddar, but the recipe asked for strong cheddar. I didn't know how cheesy it would be so I picked a soft one, but afterwards I realized a strong cheddar would've been better.

Anyway, enough talkin', lets get cookin'. Making grits is very easy. And that's good when you wake up in the morning and you're half awake and hungry. Here's what you need: 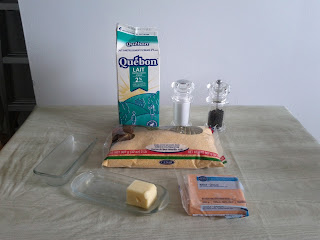 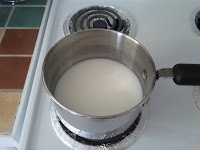 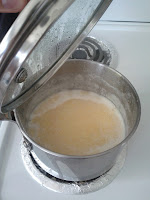 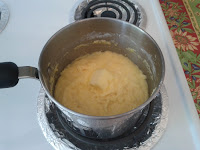 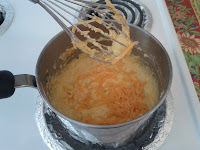 The end result should be a big cheesy orange mush. The idea of eating cheese flavoured mush might not be appealing to some, and the picture may not look very appetizing, but trust me on this one. It's really good! But, very rich though. Using margarine would've been a good idea I think. And thank god I used the low fat cheddar with the amount of butter you have to put in there. Some other improvements I think would have been to use no salt, but I would certainly have added bacon to this instead. There's also another recipe out there where they add jalapeno peppers! I bet that's super tasty. Most recipes though will suggest using half strong cheddar and half some other more creamy cheese to get the right texture and flavour. 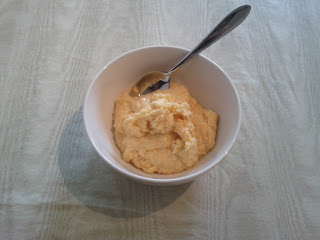 A Canadian sugar shack version of this could include brown sugar instead of salt and pepper and maple syrup instead of cheese. With the bacon of course. Hmm... Maybe I'll try that next time!