This week I went to the Subway sandwich shop close to my office for lunch. I decided to order a tuna salad because I didn't want to fill up on bread and feel sleepy the rest of the afternoon. And tuna is pretty much the best meat option they have for a salad. Plus, I felt like having tuna. But, the guy who made my salad didn't know how to make one. He was so lost. First of all he put about the same amount of veggies you would put in a sandwich. So I barely had any lettuce. For the rest of the vegetables I had to ask him to cut them up because otherwise the big slices of tomato and cucumber don't mix in the salad and they're not bite size. Plus, he barely put any tuna! Come on, man! It's the same price as a full 12 inch sandwich! At least give me just as much tuna! Finally, the cherry on top is when I ask for some oil as the dressing. They only had the Subway special which is oil and oregano. He turned my salad into a fucking soup! Way to fuck up an easy meal, dickbag! I bet you're going to be fine when you go live by yourself during college, if you even ever get there. Heck, I think the vegetables in my salad had a higher IQ than the guy making itNeedless to say, I was unhappy and left quite dissatisfied. So I thought "if no one can do it right, do it yourself! And I did. And that's why this recipe is called the Fuck-You, Subway! salad.

I decided to make mine out of baby spinach, veggies and fish. (Tuna, Salmon, Mackerel, etc) Simply because I find that spinach has more flavour than regular lettuce and it has lots of iron and other very good stuff. In terms of dressing, I chose to use olive oil, balsamic vinegar and some maple syrup for a sweet twist. So here goes: 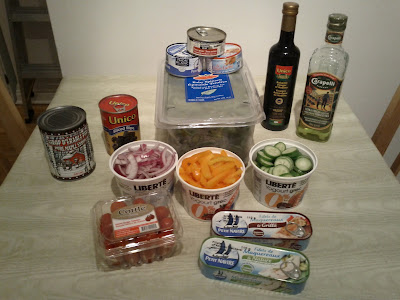 The obvious:
Slice the red onion in rings and slice those in half.
Slice the bell peppers in bite-size strips.
Slice your cucumbers. 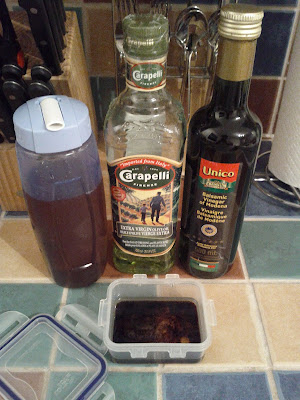 Toss a handful or two of spinach in a bowl, add a handful of peppers, onions, olives, a few cherry tomatoes, sprinkle some Italian herbs. Then flake the fish and add it and cover with the dressing.

Optionally you can add some shredded cheese, which would have been nice had I thought of buying some. (d'oh!)

All in all, it makes a colourful great tasting salad and it gave me the opportunity to raise my middle finger at Subway for sucking so bad at making salads. 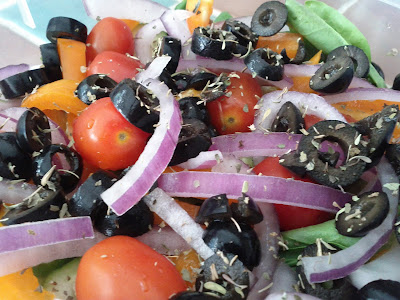 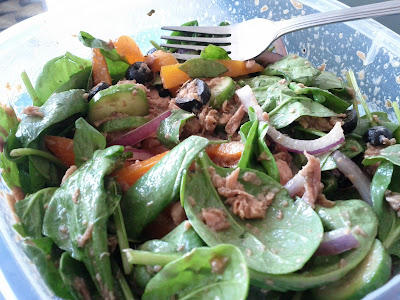