I went on a fishing trip this weekend with family members and spent the most of the weekend with them so I didn't have time to run my routine weekend errands. Monday night I came home late from work and I went to do my groceries on an empty stomach, which is not recommended by the way. I was hungry and I wanted to have a quick dinner when I come back home. But, being ze fancy French homme célibataire that I am, I wasn't going to settle for a can of Cordon Bleu's meatballs in gravy, the ultimate bachelor chow. Also, it was a hot evening and it was 30 degrees celcius (that's 86 farenheit for all you non-metric dickheads out there) so I didn't want to cook up a storm and heat up the place.

So as I walked in the grocery store, I started off in the deli section and my eyes randomly set on a little package of rabbit, pork and white wine paté. The French in me thought well here's an idea: I'll have myself some of that paté on a crusty baguette! HanHanHan! But, to eat just the paté alone would be lacking in variety. So I went to the other side of the fridge and grabbed a puck of Le Boursin garlic and chives cream cheese. I remembered I also had half a small jar of homemade fruit and rosemary jam that a friend of mine had made and gave to me a while ago. I thought it might be good with some prosciutto an other fine Italian cured meats and lucky enough for me, I found a little variety pack of prosciutto, salami and beef. And being as hungry as I was, I ended up grabbing a huge jar of pickled eggs to go along with it. I do loves me some pickled eggs, especially as a little afternoon snack with some salty crackers.

When I got home and put away all the food I bought, I prepared my dinner: slicing the baguette. And thus, ze lazy French dinner was served! 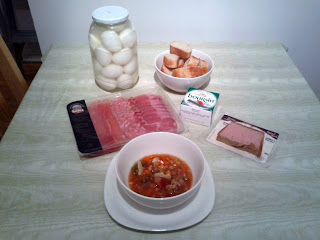 So the idea is that you grab a slice of baguette and you can either spread some paté or cheese, or you can roll up a slice of meat on the bread and top it with the jam. You can slice the pickled eggs and eat them with the bread too if you want, but I prefer to eat them whole. Also, I happened to have some of my mother's hearty vegetable soup on hand as well, so I thought I'd have it at the same time.

If you want you can replace the jam with some fruits. One that tastes particularly good with cured meats is watermelon. You cut it up in little cubes and you cover it with a roll of prosciutto and stick them together with toothpicks. It's the perfect little fingerfood on a hot summer day. Figs are another delicious alternative, the sweetness of the fruit and the crunchiness of its seeds really combine well with the meats.

And this, dear readers, is ze lazy French célibataire's dinner.
Posted by Stephane at 13:15