Since I made the German dish last week, I've had TONS of garlic sauce left. (I made a double batch.) I was wondering what I was going to do with what's left. I didn't want to throw it away because that would be such a waste. So I thought "hmm, what usually goes well with garlic sauce? SHISH TAOUK CHICKEN! DUH!". So that's what I did. It's pretty simple to make really. All you gotta do is marinade chicken in some garlic-y yogurt and lemon juice marinade with different spices for a couple of hours, impale that meat with skewers with some vegetables and roast that shish up in the oven and BAM! your taouk is done! You can serve that with a side of white rice or roasted potatoes, which are also easy to make. So here's how it's done. 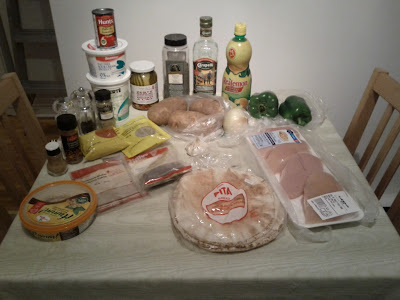 I made roasted potatoes so here are the ingredients.
And other ingredients to make the pita sandwich and sides 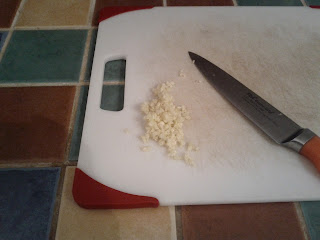 Next, mix the yogourt (in my case, add to the garlic sauce from last week), olive oil, lemon juice, tomato paste, garlic and spices all together in a big bowl to make the marinade. 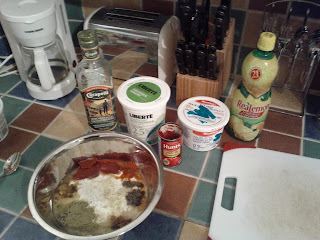 Once thoroughly mixed, cut the chicken into large cubes of about 3cm or 1in. and dump them in the marinade. Stick that in the fridge for a few hours, say about 3-4 hours max. 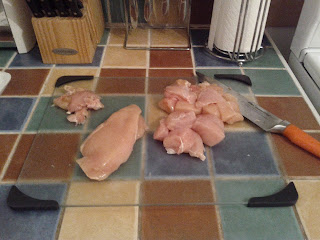 Meanwhile, set the oven to 400 degrees Fahrenheit. Then, wash your potatoes and cut them into cubes. 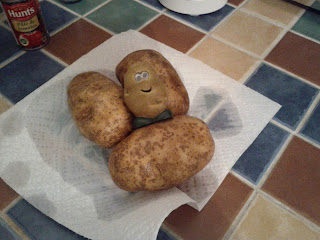 In an aluminum dish, drizzle some olive oil over the potatoes and sprinkle with salt, pepper, thyme and rosemary. Mix it all up until all the potatoes are covered in oil and herbs. 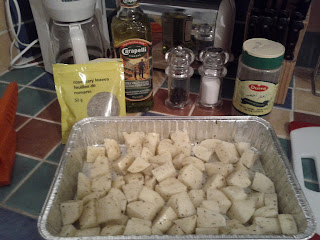 Stick that in the oven until the potatoes are roasted golden brown and crispy. 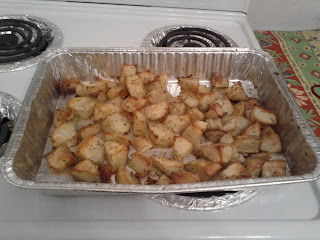 Actually, mine could've cooked a bit longer I think.

Now, while those potatoes were roasting nicely in the oven, you should've cut the peppers and the onion into large chunks like so. And break down the onion so you can add the layers to the skewers. 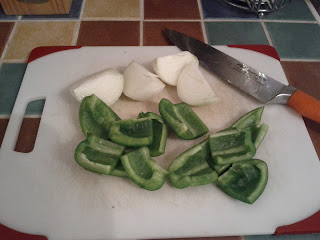 When the potatoes are done, transfer them to a container or a plate so we can re-use the aluminum dish. After the chicken marinated for a while, take it out of the fridge and start making your skewers. 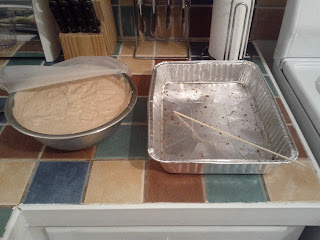 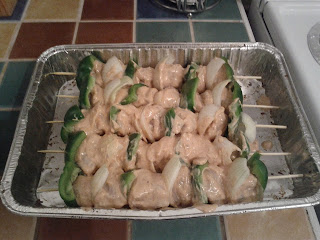 Stick that in the oven until the chicken is thoroughly cooked and moist and delicious. 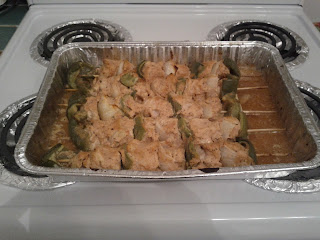 Finally, open up a large pita, slather it with hummus, add a couple of slices of pickles and add the contents of a skewer in there. (Remember to remove the wooden skewer, stupid!) 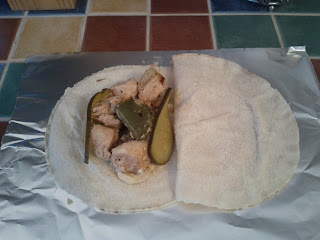 Serve that up with the roasted potatoes and some stuffed vine leafs and you're all set! That's how you make a chicken shish taouk pita!
Posted by Stephane at 01:27