Good evening everyone. Tonight I will be showing you how to make the most cunning linguine covered in Alfredo special creamy sauce. A true sensuous delight both in texture and flavour. Mmmm! I've been craving this recipe for a while now and this weekend I was given a pretty big chunk of smoked ham. I thought this would be the best time to make this recipe and finally quench my craving.

When I initially looked up Alfredo sauce recipes online I found out it was pretty fat. Cream and butter and cheese. Basically, everything that was ever made from the fat of a cow's milk! I'm sure that's delicious, but I have a slim figure to keep if I still wanna fit in those skinny jeans in the future. So, I remembered some tricks my ex-girlfriend had taught me along with everything else about cooking. Some ingredients can be easily replaced by a healthier alternative while still maintaining the recipe's intended taste and texture. Instead of cream, use evaporated milk. Instead of butter, use margarine of course. For cakes, instead of butter, use coconut oil. Instead of cream, use sweetened condensed milk. Etc.

Most recipes I found said to use about a cup of  cream, about half a cup of butter and 3/4 cups of Parmesan, salt and pepper and some herbs and spices. After looking at so many recipes and not finding a healthier alternative, I made my own. So, tonight I will show you my healthier version of Alfredo sauce and how to make a nice pasta dish with ham, broccoli and mushrooms. First, here are the ingredients: 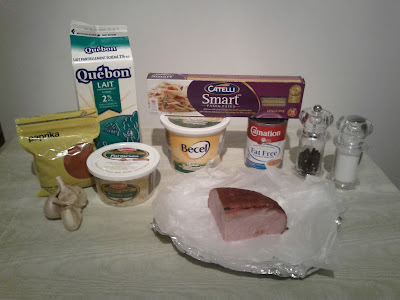 Not pictured here: the mushrooms and frozen broccoli

First, boil some water in a large pot with a pinch of salt and cook your pasta. In the meantime you can do the sauce. For the amount of sauce, I guess half a pack should be just right for the amount of sauce this recipe will make. Once cooked, drain in a colander and rinse in cold water to stop the pasta from overcooking from the heat of the bundle of pasta. 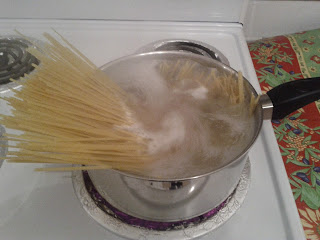 While the pasta is cooking, either press or mince the cloves of garlic. I don't have a press so I minced it up. 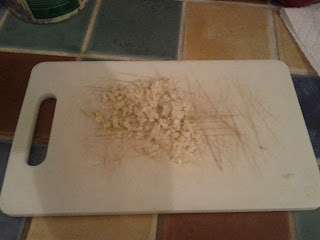 I always hated how my fingers smell for a week after cutting garlic.

Open up the can of evaporated milk and pour in a sauce pan. Heat up at medium-low heat and bring it to a simmer. When it's hot and just barely bubbling, add a cup of margarine and let it melt and whisk the mixture to blend thoroughly. 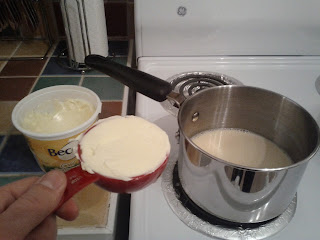 I know this looks like a lot, but trust me on this one.
Also, I used margarine instead of butter because, you know, fat. 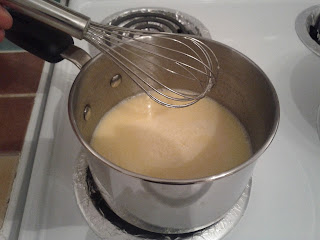 Next step is to add the chopped garlic and 1 cup of Parmesan cheese. I used fresh Parmesan flakes. You can also buy a block of fresh Parmesan and grate it yourself if you want the extra trouble. Just don't use the Kraft grated Parmesan in the plastic green container. Please don't, or it will wreck the taste. Add the Parmesan gradually and mix constantly to melt it in the mixture. 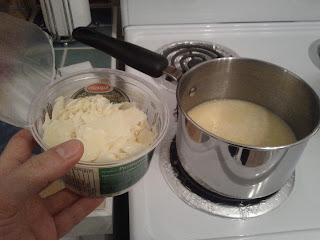 Add the paprika and whisk to blend it in thoroughly. Add salt and pepper to taste and mix well. 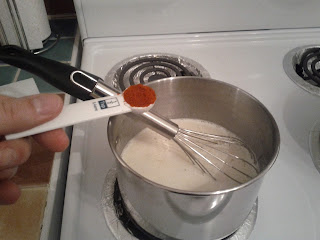 Let it simmer by whisking it often to avoid it sticking the the bottom. It will eventually thicken as the water evaporates from the mix. Once it's thick enough, you may remove it from the heat. 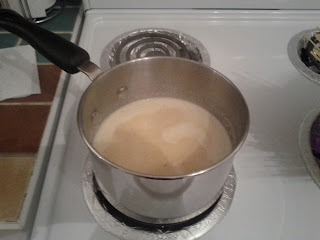 I made the unfortunate mistake of adding dried parsley flakes to the mix and somehow this separated the oils from the margarine from the rest of the sauce. It made a weird chemical reaction, so I don't recommend adding it directly to the sauce, but rather use fresh parsley as a garnish. It also adds flavour and very tasty! 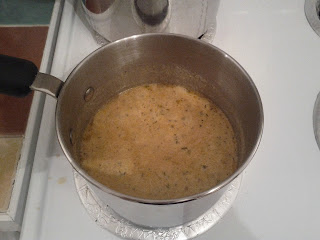 Ah darn! And I was so close to having the creamiest sauce ever!

Next, we need to prepare the meat and veggies. So start by steaming up or boiling your broccoli. I prefer steaming because it leaves less water. Once cooked, remove from heat and set a 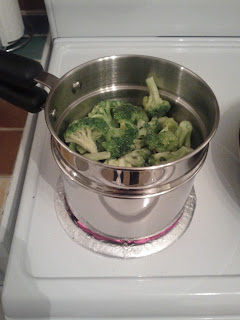 While the broccoli is cooling, start cutting your chunk of ham into small cubes. 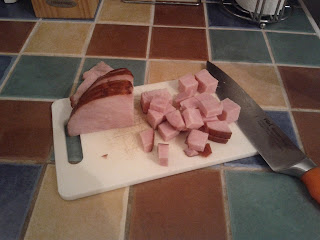 In a large pan, add a tablespoon of olive oil and heat up to medium heat. Then add the ham. Break up the slices of mushrooms into small pieces and add to the pan. Cook until the ham is slightly grilled and the mushrooms are brown and smaller. 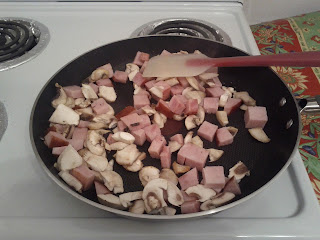 Once cooked, remove from the heat and set aside. 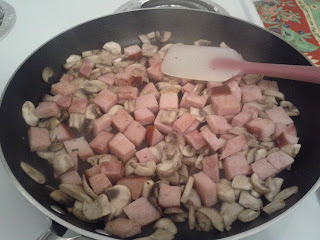 Now everything should be ready. In a large pot, over low heat, transfer the sauce, broccoli, mushroom and ham. Mix it all well. 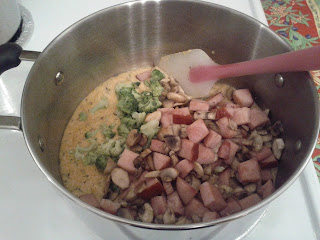 Finally, add the cooked linguine and mix it all in to make a creamy Alfredo pasta dish! 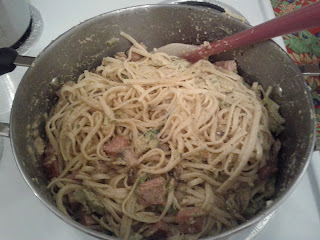 I cooked the whole box and it was too much pasta for the amount of sauce I made.
It was still good though!

One thing to remember, because the sauce is made of cheese and margarine, when refrigerated, it will thicken and harden. So, if you're going to have this for your lunches, like me, it's best to split into separate containers right away, otherwise you won't be able to do it later unless you cut the pasta dish with a knife. 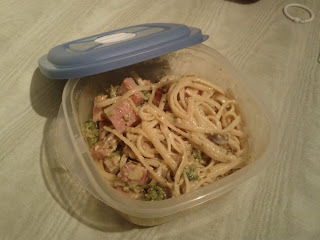 And that is that! I had it for my lunch the next day and it was fantastic!!! The taste was so amazing. The mix of Parmesan, and garlic married the ham, broccoli and mushrooms very well with the pasta. This is a success that I will be sure to make again sometime soon. Especially if I have guests over. It would be perfect with a nice cool glass of white wine!

Bon appétit!
Posted by Stephane at 00:54