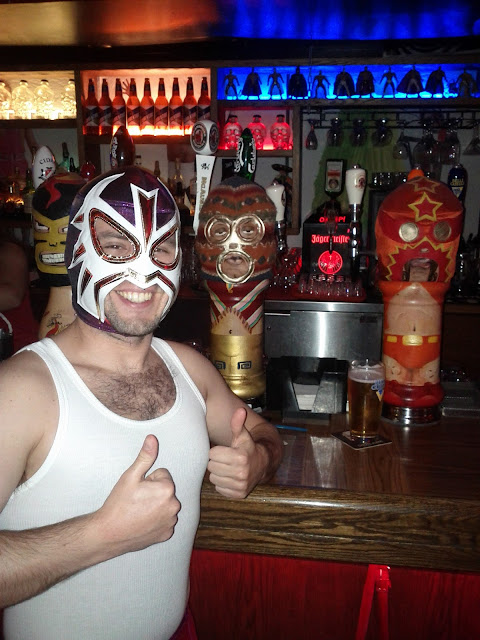 ¡Hola muchachos! Golden Thunderpants here to tell you about an incredible Mexicano recipe that I've cooked up! Every year, at the lucha offices, we organize a potluck for Halloween. Last year I made tasty nacho-breaded chicken strips with salsa! It was a pretty simple recipe. You take a bag of Tostitos nacho chips and you give it a good supplex or a pile driver to obliterate them into tiny little bits. Then you dip your chicken strips in flour, then egg wash and you roll them in the nacho chips and you bake them in the oven at 350 until the meat is all cooked. Then you serve them hot with a tasty salsa dip! But, that was last year.

This year, I decided to make home made soft shell tacos and they were an absolute hit with the señoras at work! There are a couple of co-workers who are vegetarians too, so I made an extra filling just for them so everyone can enjoy my delicious tacos! The whole meal was composed of either spicy ground beef or a home-made spicy bean dip, a tasty fresh tomato, avocado, red onions, mango and lime salsa and tex mex cheese on a soft fajita shell. It was absolutely delicioso! 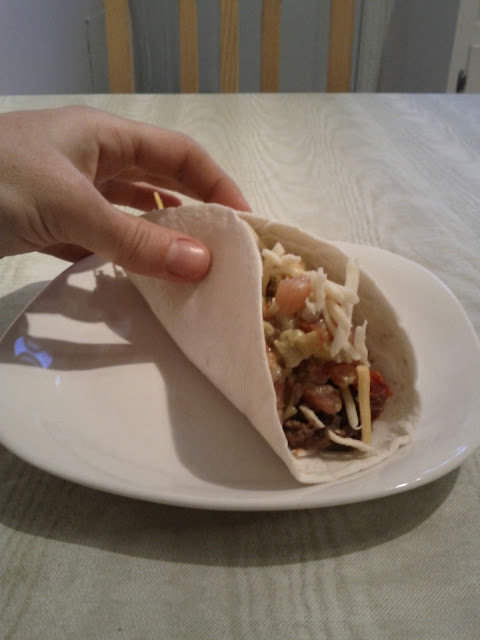 Consider yourself lucky, amigo! Because today, I will tell you how to make the great Golden Thunderpants Tacos! Here is what you need. Keep in mind that I made this for a ton of people so you might want to reduce the portions a bit, unless you are having a fiesta, in which case you'll be just fine.

First here are the ingredients for the salsa: 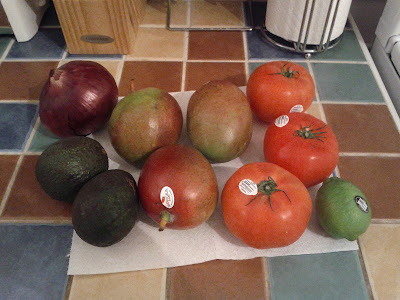 Get yourself a cutting board, a knife and a very large bowl and start chopping away. Make sure you chop everything in small 1cm (~1/4in) cubes or less if possible. Add them to the large bowl as you go along with the ingredients. 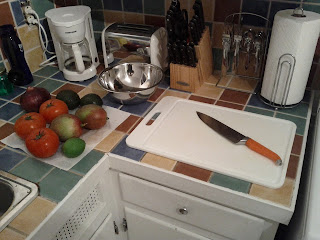 Remove the heart for the tomatoes and chop away! To remove the heart, I insert the knife around the stem to make a 2cm (1/2in) square and just push it out with my thumb. 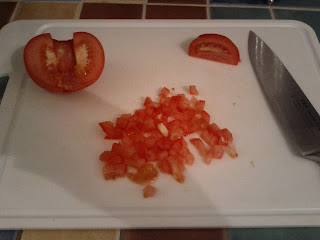 For the avocado, slice it in half by inserting the blade and sort of cutting all around the large seed. Then knock it on the cutting board with the knife, then jiggle the knife sideways and it should open practically by itself. Then take a spoon and sort of separate the skin from the flesh. Then chop it all up real good. Be careful, those are slippery hijos de puta. Also they will make a mess of your board, so wipe it off afterwards with a paper towel. 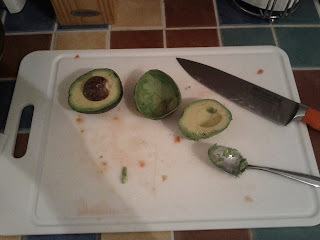 Next comes the mangoes. When you pick them, make sure that, like the avocado, they're a little soft when you squeeze them to make sure they're ripe enough. Those are tricky because the large seed in the middle is flat and the flesh is pretty stuck to it. So try to get a feel with the knife where the seed ends on each side of the fruit and cut it lengthwise along the seed on each of its sides. 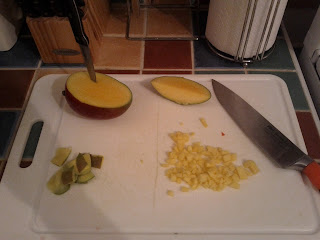 Then we have to cut the onion. Make sure it's a large one because we'll need one half for the salsa and the other for the bean dip we're going to do later on. Here's a trick on how to cut onions. Cut it in half while it's still all covered with it's dried up skin on the outside. It makes it easier to remove the skin. Then cut the onion  by going always towards the center. This way, when you slice it afterwards, it all falls apart into neat little pieces. Make sure you chop them a little bit more to make sure they're tiny enough. 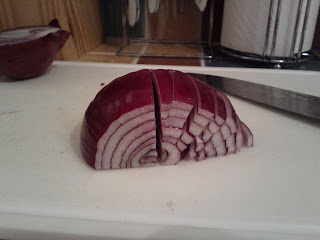 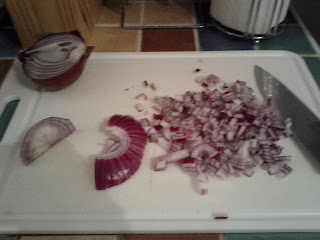 Finally, slice the lime in two and, with all your luchador might, squeeze the juice out into the chopped vegetables and mix everything well using your strong manly hands or a couple of spoons if don't like getting your hands dirty. 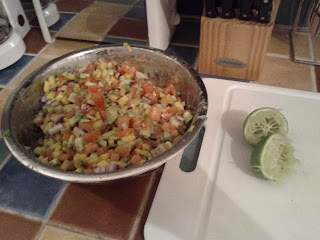 And there you have it! The tasty fresh salsa! 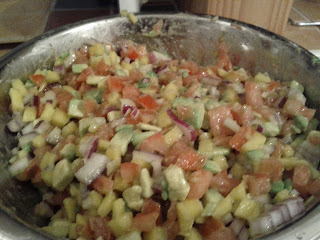 Now it's time to make the vegetarian filling. That filling was made with black beans, red onions, red bell pepper garlic, salsa cornmeal and spices. It fairly straightforward and easy to make, but you need strong fists to pound the black beans into a purée, like I would with my adversaries in the ring! So here are the ingredients: 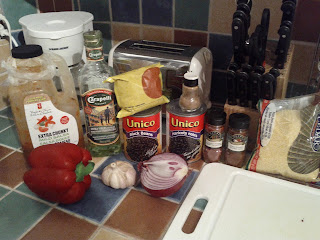 Start by opening and draining the cans of beans and make sure there is no more water left on the cans. Then pour the black beans in a large bowl and mash them. I used my mighty fists of the Mayan gods, but you can use a potato masher instead. 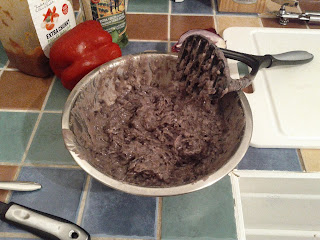 Ok you got me, I used a potato masher.
Otherwise I would've punched through my counter!

Afterwards, mince up all your vegetables and garlic into tiny little bits. 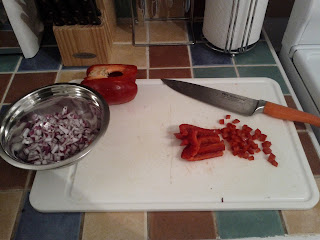 Then, mix up all the spices and cornmeal together in a bowl and stir them up to mix them well. 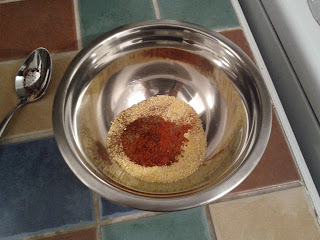 You're all set! Lets start cooking! In a large pan, put the olive oil. About a tablespoon or enough to cover the  bottom of the pan so your food doesn't stick. Set the heat to medium and when the pan and oil are hot, add the vegetables and let them cook until they get soft and the onions are transparent. 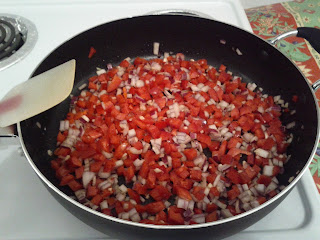 When the vegetables are cooked, slowly pour the mashed black beans in the pan. Then cover with half the mixed spices. Stir the black beans with the vegetables so that everything gets mixed evenly. Then add the rest of the spices and stir some more! 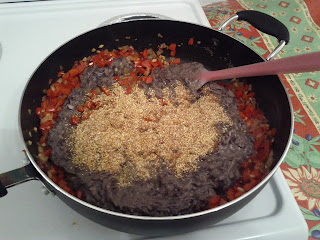 Add the salsa and stir again! Mix it all up real good! 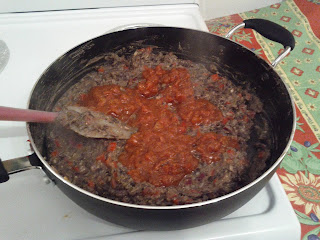 Finally, lower the heat to medium low and cover for 5 min. (Check from time to time so it doesn't stick to the pan.) 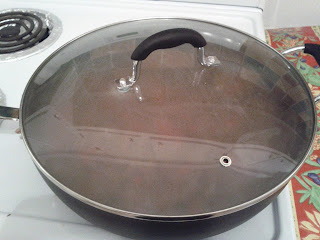 After 5 minutes, remove the lid, stir it well and let cook another 5 minutes or until the mixture becomes thick enough. At this point we just want to evaporate the excess water. Stir occasionally so it doesn't stick to the pan. When it's thick enough, remove from heat and let it cool a bit and you're done! 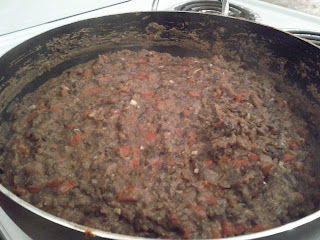 At this point you're ready to eat if you want your tacos vegetarian. Just take a small soft fajita, put some of the bean mixture, add the home made salsa and some tex mex cheese and dinner is ready!

But, if you are like me and you like to eat the flesh of the animals to gain their powers and strength, then here is how to make the tasty spicy beef filling for the tacos! Again, remember that I used enough meat here to feed an entire league of luchadors, so you might want to adjust the proportions. 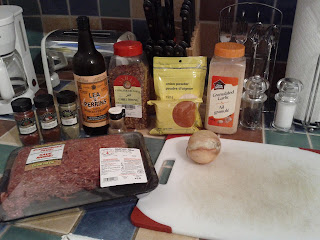 Mix all the spices into a bowl. Just pour them all in and stir them up so they are all well mixed. 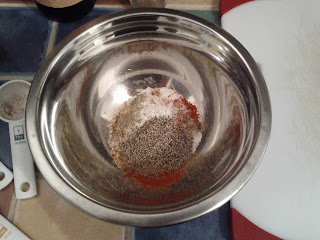 Mince up the onion into muy pequeña pieces. 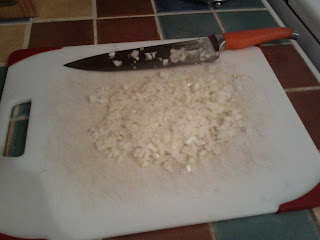 Put a large pan over medium heat, add the oil to cover the base of the pan and cook the onions until they are tender and transparent. 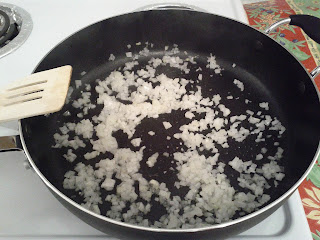 Then add the ground beef and break it apart using a spatula and mix with the onions. 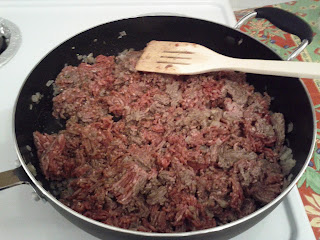 Add the Worcestershire sauce and spread half of the spices across the beef. Stir it well so the spices get mixed well in the meat. Then add the rest of the spices and stir some more! Then let it cook by stirring occasionally. There might be a lot of water from the beef, so cook until most of the water is evaporated. And that's it! You're done! 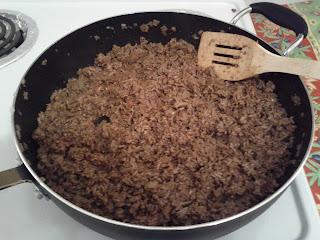 Now you can transfer all that you have cooked up into containers and serve with a stack of small fajitas and let your guests make their taco! Optionally, bring bottle of tequila, shot glasses, some limes quarters and a salt shaker for a good time! ¡Bueno apetito! 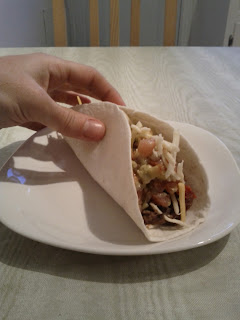