When I was a kid, my mom sometimes had to cook dinner in a pinch. She had a recipe for a "Chinese" macaroni. It's not really a Chinese recipe per se, but has many ingredients and sauces you find in that cuisine. It's fairly easy to prepare. You just chop up vegetables and cut chicken breasts into cubes, cook it all, make some pasta, mix it all together with Hoisin sauce, soy sauce and some pepper and you got yourself a meal. It's such an easy recipe even my dad used to make it for the family when my mom worked late. Then again, he would screw it up sometimes, but whatever. I don't know anyone who can cook any kind of meat on the barbecue better than my dad. So the steaks, hamburgers and BBQ roasted chicken made up for it. And I can't complain about that. He was also the king when it came to baking home made brownies and cake before my sister grew up and became the best baker the family has ever known. Yep, I'm mama's boy, cooking breakfasts, lunches and dinners while she's daddy's little girl with the cakes, cupcakes, brownies and cookies.

This week I was tired and needed a good meal for my lunches. I felt like making this recipe because I was sort of craving the taste of Hoisin sauce for some reason. So I went to the groceries after work on Monday, got the ingredients and made it. It's good, easy to make, but it takes a while to prepare because you just have to chop everything. Anyway here's how to make it: 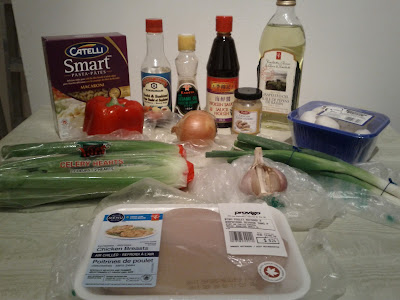 First of all, boil some water and cook 2 cups of elbow macaroni. While it's cookin', get choppin'! Start with the vegetables and chop everything up as fine as you can. Except for the red pepper, you want to have small cubes. And only slice the mushrooms, they will shrink when you cook them. When the pasta is cooked, drain and rinse under cold water to stop it from cooking any further and put aside. 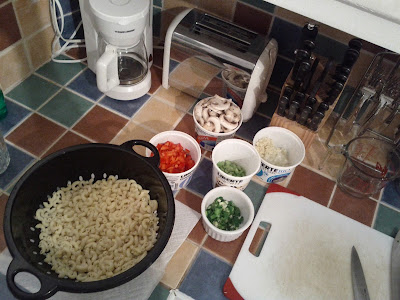 Then cut your chicken into small cubes. Put some oil in a very large skillet or deep pan and heat it up on medium heat. Then add your cubes of chicken and cook until the meat is white all the way through. 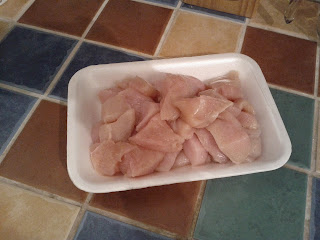 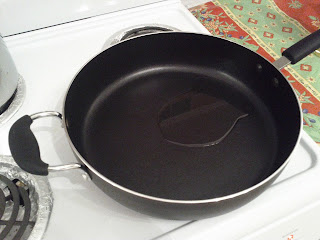 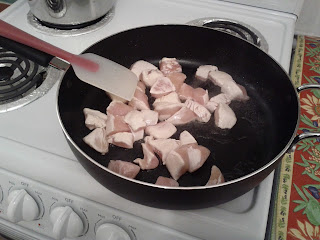 Once the chicken is cooked, drain and put aside. Use the same pan and put some oil again and fry your vegetables. Start by adding the onion and garlic, the celery and the pepper. Cook these vegetables until they change colour. The onions should become a little darker and the pepper and celery should become tender. At this point, add the mushrooms and green onions and cook until mushrooms have shrunk and changed colours. 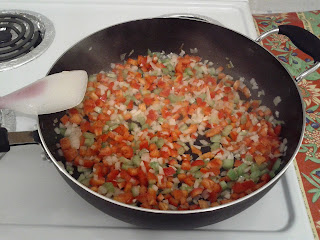 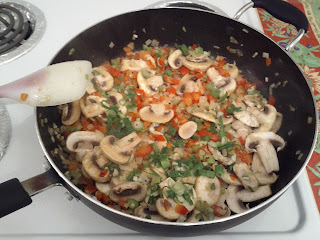 When the mushrooms are cooked, add the chicken and the pasta and mix well. 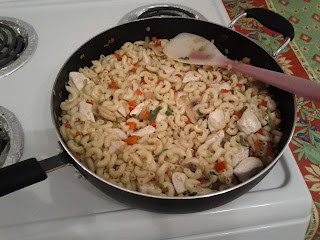 The last step is the seasoning. Add 2 teaspoons of sesame oil, 6 tablespoons of Hoisin sauce, 6 teaspoons of soy sauce, 1/2 tsp of Chinese five spices and some pepper to taste. Then mix it all in until the pasta and chicken become brown. Taste it and add Hoisin sauce, soy sauce and pepper to taste. Just be careful with the soy sauce because it's very salty and if you put too much you can ruin the taste. When everything is mixed thoroughly, let it heat up for a while so it's nice and warm when you serve it in a place. 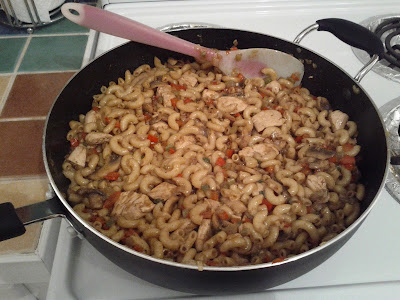 The Chinese five spices weren't part of my mom's original recipe. But, I felt like it was a bit bland. Those spices are super strong, but not in a hot spicy sense though. They smell very strong and give this sweet pungent smell and amazing flavour to the dish. I added a few pinches to the whole thing, about half a teaspoon, and it was plenty!

I'm so glad I made this because it reminds me of a more simpler time when I would come home after school and have my mom's macaroni and just chillax all evening afterwards doing my homework in front of the TV. A time where the only cares I had in the world was to get good grades in school and play with my friends. Also, it's only after I left home and learned how too cook for myself that I realized how much effort my parents put into feeding my sister and I. I am so grateful for having such loving and supporting parents. It's thanks to them and their support through all my hardships in life that I am where I am today. I wish everyone had parents like mine.